Sitting Down with Mr. Levy

From Hemingway to Hendrix, he’ll always have something to talk about. 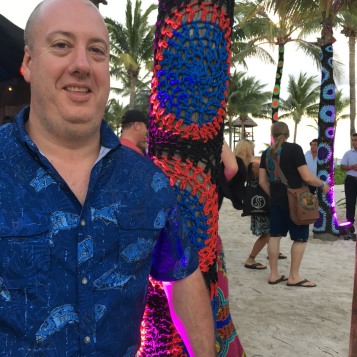 Mr. Levy is an English and creative writing teacher who just came to Broadneck three years ago. As our sole creative writing teacher and an English 11 and 12 teacher, he takes on many responsibilities between the three different classes. However, he teaches them all with so much passion and excitement that students would think his only purpose is to teach their class. He loves Ernest Hemingway, Penn State, and talking about growing up in England, where he developed his deep love for the band Pink Floyd (bonus points if you like them, too). His quirks are visible at every angle, from the trippy posters around his room, to the strange school pictures of himself, to the way he talks. He also has an endless collection of odd and interesting stories that range from going on spirit quests in the New Mexico desert to being in a movie with his high school marching band. No matter what the conversation is about, talking to him feels like talking to a friend you’ve known for your entire life.

What was different about growing up in England versus the United States?

People reserve judgement on other people, which can be a good thing sometimes. They won’t tell you what’s on their mind like most Americans do, so if they’re going to talk about you, it’ll be behind your back. I was a kid though, so I didn’t experience much of it. I went to a private school, which was much stricter than American schools. All of the kids had to wear uniforms. Also the food is very different there, I think it’s better, and they never chew gum, which surprised me once I got to America.

Why did your parents choose to move to England?

My dad was in a company that moved him over there, so just for work.

When did you get into Pink Floyd?

When I lived in England, it was everywhere, like the bus drivers were listening to Pink Floyd, kids would wear ‘We Don’t Need No Education’ shirts (but my parents wouldn’t let me have that). It wasn’t really until 1991 at the last Pink Floyd concert that I really got into them.

What made you love creative writing so much?

It was English and literature first, so that was the first thing. My creative writing teacher in high school, shout out Mr. Gilbert, was awesome. He was kind of a goofy guy and really got me interested in finding my voice, and I thought I wanted to help others do that too.

Why did you want to become a teacher?

My English teacher in eleventh grade transformed the way you’re supposed to look at a book. I used to think of it as work, but after having him it was a kind of time capsule, like looking into the past and reliving it, so I wanted to pay it forward. I started out in pre-med and pre-vet; it was my junior year in college and everyone in my family is scientists, so I just decided I was going to do what my heart told me to do, and that was to drop everything and pick up English. I guess part of becoming a teacher was me saying I’m good at public speaking, I really like to read and write, so how do I put it together?

Why does Hemingway specifically inspire you so much?

The same eleventh grade English teacher got me into Hemingway. Hemingway is anti-fake everything, so it’s all about being true to yourself, being true to how you see the world, and that transcends into your writing. When you read his work, it’s very simplistic, and he wants you to find your own voice as long as it’s your own, so I thought the originality and being genuine is what really drew me, and the adventurous nature of his spirit.

How did you meet your friend that took you to New Mexico for a spirit quest?

out to Victor Coronado! He was a Spanish teacher who taught right next to me, and he was the Hispanic version of Levy if that means anything, so he was goofy and motivational, and we used to play pranks on each other in our classrooms, and then we started hanging out. I was already friends with his wife because she was an English teacher, and she actually taught at Broadneck. But over the past fourteen or fifteen years, just teaching next to each other and having the same spirit, we just connected.

How did you react the first time you went on a trip with him?

Oh, my Navajo spirit quest. It was intense, because I was with his entire Navajo family which was, like 25 people, and I was the only non-Navajo one, and we were in the middle of the Rocky Mountains. But it was transcending.

What is your favorite thing about teaching high school?

Freedom to teach, like even though they selected novels to teach, I think they were selected well, and I love high school students who can carry a conversation and talk about the literature and talk about their lives, and just seeing how they grow from when they’re a freshman all the way until they’re a senior.